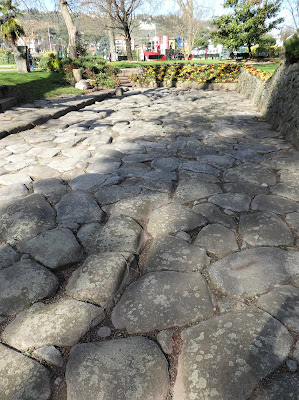 Part of the Roman Road 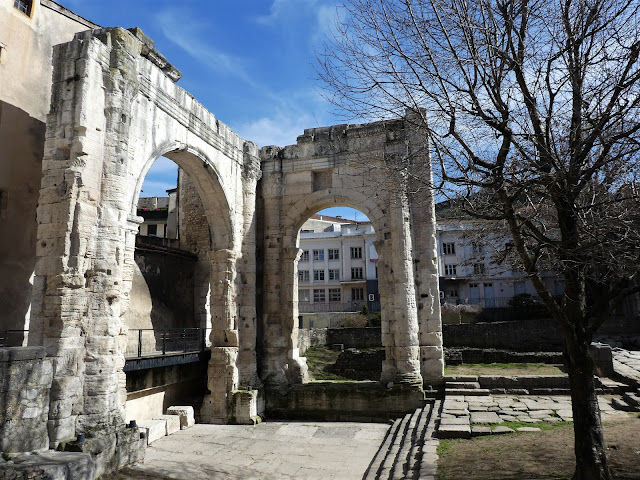 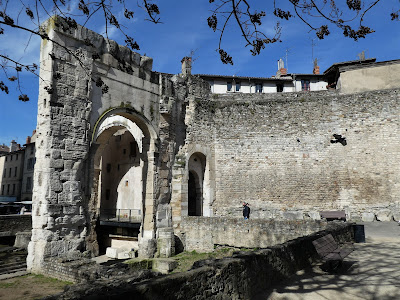 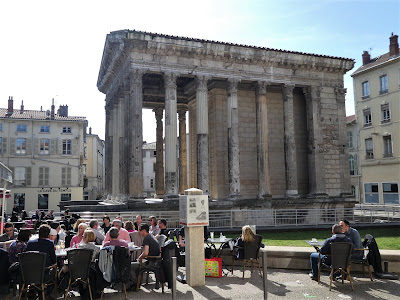 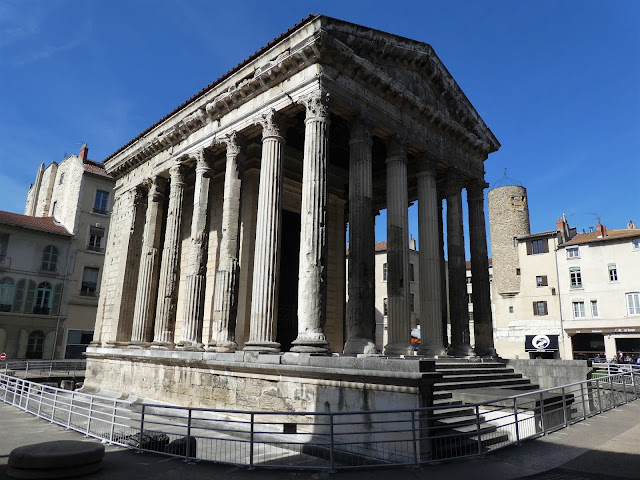 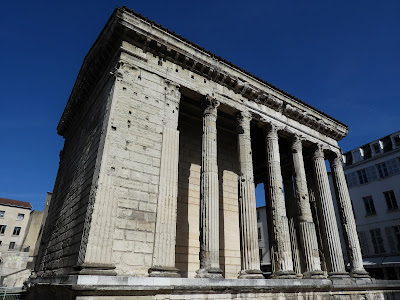 The Jardin archéologique de Cybèle contains the remains of a section of the Gallo-Roman city.  There are arcades of a portico bordering the forum area, a wall suggesting the existence of an uncovered room & vestiges of a residential area with houses and terraces.  Construction dates to the beginning of the 1st century AD.

The temple of Augustus & Livy is a typical Roman temple with Corinthian columns, located at the center of the ancient city & still standing at the center of  Vienne.  The temple was dedicated to emperor Augustus & his wife Livy. There is construction from 2 different periods. Only the rear wall remains from the last quarter of the 1st century BC after the rest of the building, probably unfinished, collapsed.  There is evidence of fire.  The rest was rebuilt at the beginning of the 1st century AD.  The temple was originally dedicated to Augustus alone, but in 41 AD the emperor Claudius re-dedicated the building to include Livia, his grandmother.

After the fall of Rome, the temple became a church until the French Revolution.  It then began to have a series of different uses, including library & art gallery in the 19th century.  The temple was later restored to its appearance during the Gallo-Roman era.

This temple is similar to the Roman temple in Nîmes & presumably many other temples in Gaul. These temples are particularly interesting because they are so well-preserved.  They illustrate the model for many significant buildings constructed in Europe & America from the 17th to 20th centuries.


The return to classical styles in architecture began with Andrea Palladio (1508–1580). Palladian architecture grew from Palladio's ideas based on the classical temple architecture of the Ancient Greeks & Romans.  Palladianism got its start in Britain during the mid-17th century & then spread to the British colonies in North America.  A famous example is Thomas Jefferson's Monticello in Virginia.  I saw that building in the fall of 1973 with my father, an architect.

The Early Classical Revival style developed at the end of the 18th century took inspiration directly from the ancient buildings of Rome & Greece. While earlier styles were also inspired by classical forms, they used only architectural details & did not recreate the look of ancient buildings. The Roman Classical Revival & Greek Revival style copied the form of Roman & Greek temples. It recalled the power & influence of  the Roman Empire. Thomas Jefferson designed campus of the University of Virginia using ancient Roman temples as his guide.

The Neoclassical style is common in the United States. It was inspired by the World's Columbian Exposition in Chicago held in 1893, which promoted renewed interest in the classical forms of architecture. Neoclassical buildings have massive columns with classical capitals, topped by a front facing pediment. The arrangement of windows & doors is symmetrical.  The Neoclassical style was most often used for courthouses, banks, churches, schools & mansions.  My own high school was built in this style in 1912.
Posted by Jordan Jackson at 6/07/2019 No comments: