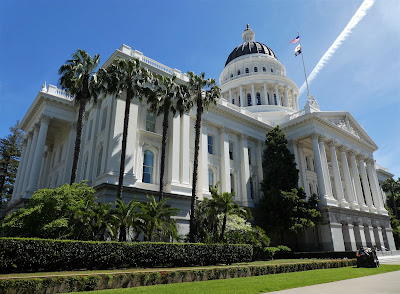 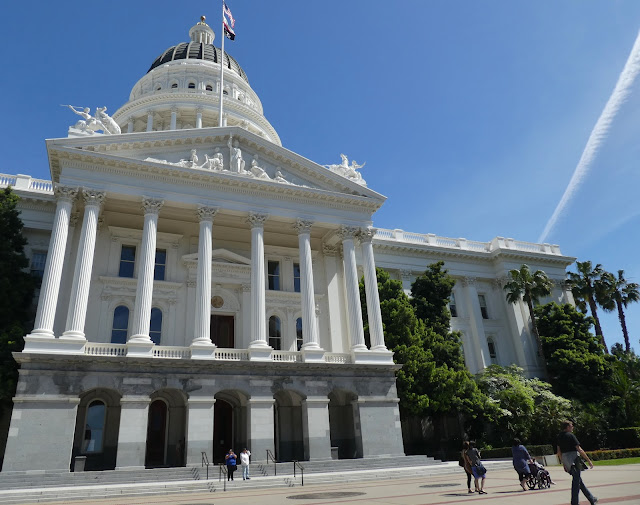 Neoclassical California State Capitol main entrance. Compare this to the classical Roman temple below (Maison Caree in Nimes, France) also copied from the Greek style & built in 12 BC. 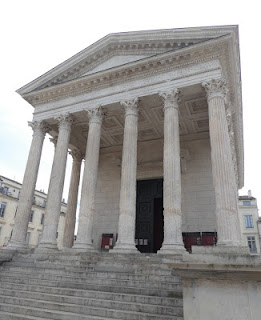 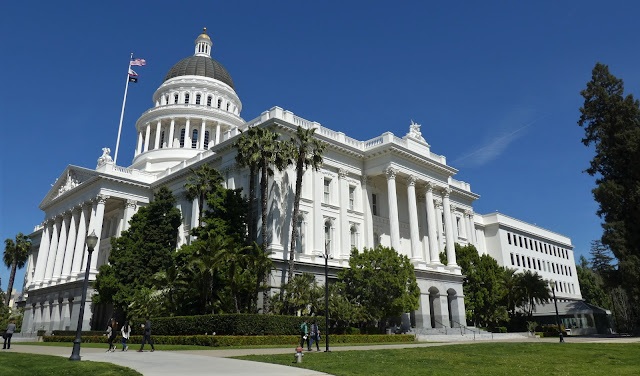 East Annex (added in 1952) is at the far right of photo.  The style has been called neo-fascist. 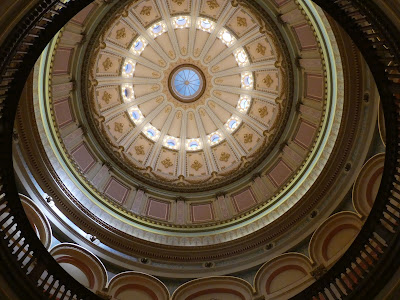 Interior of the rotunda. Photos taken in 2018.
4-13-18: We got to Sacramento at 1, had Chinese food for lunch & walked around Downtown. We saw Downtown Commons, Cesar Chavez Square, Cathedral Square, K Street Mall, the California State Capitol Building & Capitol Park. Downtown Sacramento was not very impressive. It covered a small area. There were few people on the streets. Many buildings were empty, soon to be demolished & replaced. The tallest building had 43 floors & there were only 17 buildings over 20 floors. The renovation at Downtown Commons was almost finished & nicely done. Chavez Square was pleasing, the center of Downtown. The Capitol was a beautiful old building, partly a museum. The interior was lovely, especially the rotunda.
The California State Capitol in Sacramento sits at the west end of Capitol Park, facing west on 10th Street between L St & N St. The California State Capitol was listed on the National Register of Historic Places in 1973 & named a California Historical Landmark in 1974. The neoclassical structure was built between 1861 & 1874 with major renovations between 1975 & 1982. (Neoclassical architecture attempted to replicate the architectural style & details in ancient Greece.) The building was based on the United States Capitol in Washington DC.  But the California State Capitol is smaller & better proportioned. The California Senate chamber seats 40 members. The California Assembly chamber is located at the opposite end of the building. Almost identical to the Senate chamber, it accommodates 80 members. Two new Capitol buildings were completed in 1928, the State Library & the Courts Building. The East Annex was completed in 1952, creating offices for the Governor, Lieutenant Governor, legislators & other state officials. It has quite a different, modern style.
Posted by Jordan Jackson at 11/20/2020