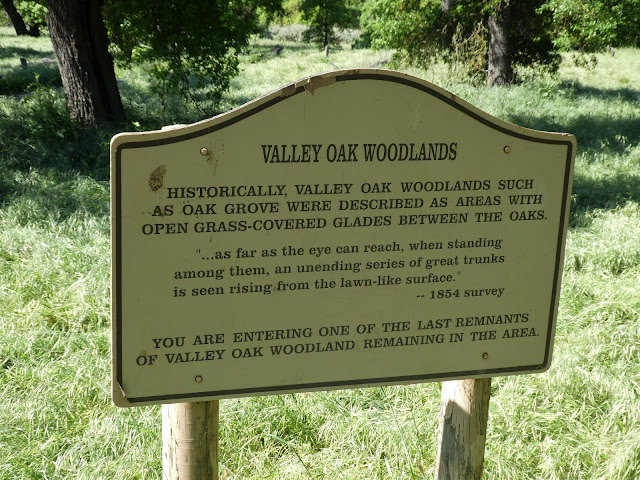 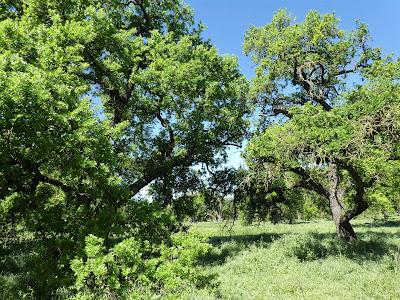 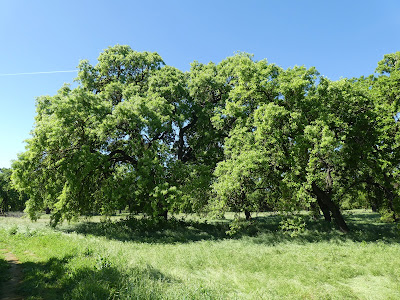 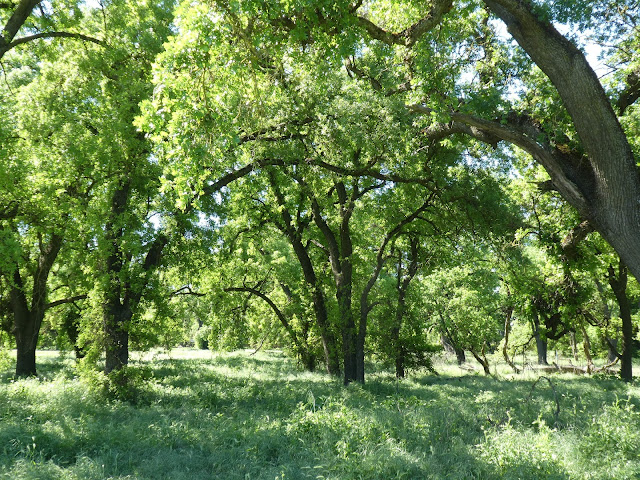 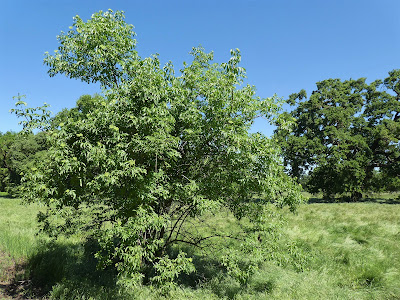 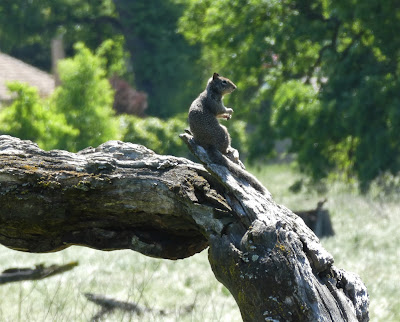 Click here for more photos of Oak Grove Regional Park.
After breakfast at the motel in Sacramento, we drove to Oak Grove Regional Park in Stockton. We walked in the oak grove for almost 2 hours. There were dozens of large, old valley oaks (Quercus lobata) in one of very few remaining groves. The trees were larger than any oak I’d seen in California before. The ground was covered with grasses & a few shrubs such as elderberry (Sambucus). We saw Canada geese, hawks & ground squirrels. Although there is housing development surrounding the park & infrastructure within the park, I didn't notice much but the oaks, the grass & the hawks high in the sky above.

Oak Grove Regional Park, between Stockton & Lodi (4520 West Eight Mile Road, Stockton) has an area of 180 acres. Two nature trails provide a 1.5 mile walk in the grove: the Yokuts Trail & the Miwok Trail. The shorter Yokuts Trail features native plants.  The much longer Miwok Trail winds through the oak grove. Oak Grove Nature Center focuses on wildlife, habitats & the native inhabitants of the area: the Miwok & Yokuts peoples. Oak Grove Regional Park is one of very few woodlands remaining in the California Central Valley.
Native Americans lived in the Central Valley for thousands of years before the town of Stockton was built. When Europeans arrived, they found the Yatchicumne, a group of Northern Valley Yokuts people, living in the Stockton area. The Yokuts built their villages on low mounds to avoid the regular flooding. A Yokuts village was located on a mound in what is now downtown Stockton. The number of Yokuts, whose settlements stretched 250 miles from the confluence of the Sacramento & San Joaquin rivers to the Tehachapi Mountains, is estimated at 18,000 to 50,000. They gathered acorns & ground Tule reeds into meal.  The reeds were also used to make baskets & mats that covered their dwellings. The Miwok inhabited lands to the north.
The number of Native Americans in the San Joaquin Valley began to dwindle after their first contact the Spanish arrived in 1769.  Between 1805 & 1825, Franciscan priests persuaded many of them to move to the Santa Clara, San Jose, San Juan Batista & San Antonio missions. Those missions were mostly abandoned an epidemic in 1833 killed 75% of the native population. During the Gold Rush of 1848, American settlers forced the remaining Yokuts from their lands.
The San Joaquin & Sacramento Valleys join where the Sacramento & San Joaquin Rivers flow through Carquinez Strait to San Francisco Bay. Stockton lies at the southern edge of the the Sacramento Delta at the confluence of the San Joaquin & Calaveras Rivers. The Central Valley is an elongated depression (430 long & 75 miles wide) between the Coast Ranges & the Sierra Nevada. At its center, east of San Francisco Bay, it is slightly below sea level. The Central Valley is actually two joined valleys: the Sacramento Valley, drained by the Sacramento River & the San Joaquin Valley, drained by the San Joaquin River. The confluence of these two rivers forms the Sacramento-San Joaquin Delta, formerly a massive wetland, now a major agricultural area.
The Central Valley contained 3 primary communities of plants & animals: Valley Grassland, Freshwater Marsh, & Riparian Woodland. Woodlands grew in the Delta & along the rivers. In the mid-1800s, woodlands covered about a million acres of the Central Valley. Today they cover only about 100,000 acres. The disappearance of woodland is attributed to overgrazing by domestic animals beginning with cattle & sheep introduced by the Spanish & continued by American settlers.  Woodland trees included Western Sycamore (Platanus racemosa), Box Elder (Acer negundo) Fremont Cottonwood (Populus fremontii) & 3 species of willow. The most impressive tree is the Valley Oak (Quercus lobata).
Posted by Jordan Jackson at 9/04/2020